DALLAS, Texas – Whether it’s on the gridiron, the hardwood or the diamond, there’s been an abundance of successful teams to hail from Dallas-Fort Worth. But there’s another championship level squad in the Metroplex. It’s one that competes on the water and is coached by the power couple of Chris Leonard and his wife Annie Couwenhoven.

What You Need To Know

“I think before we weren’t really at a level where we could compete nationally,” said senior White Rock rower Ben Winslow.

But now, under Chris and Annie’s guidance, things are different. This year, three White Rock teams placed in the top 10 at nationals (women’s U16 8+, women’s Youth 4 and women’s U15 4x+). The year prior, the women’s U17 pair team took home first place hardware.

“You can’t know what it’s like to be able to compete until you get a taste of what it’s like,” Ben explained. “Chris brought the image of what competitive rowing should be.”

The culture has changed to that of a powerhouse. Within the span of two seasons, White Rock rowing clinched back-to-back appearances at nationals.

“I was just at a loss for words, which is a really cool feeling to have,” women’s head coach Annie Couwenhoven said in reference to the 2021 U17 pair title. “Girls were celebrating on land and everyone was crying because they were so excited. It was really cool to watch them hold that trophy after all the hard work they put into it.”

Texas is quickly becoming a respectable competitor with the west coast and east coast rowing blue bloods, which is ironic because Chris and Annie both coached in those elite regions, most recently in Northern California. But then 2020 hit. The pandemic hindered their ability to do what they loved most: coach. 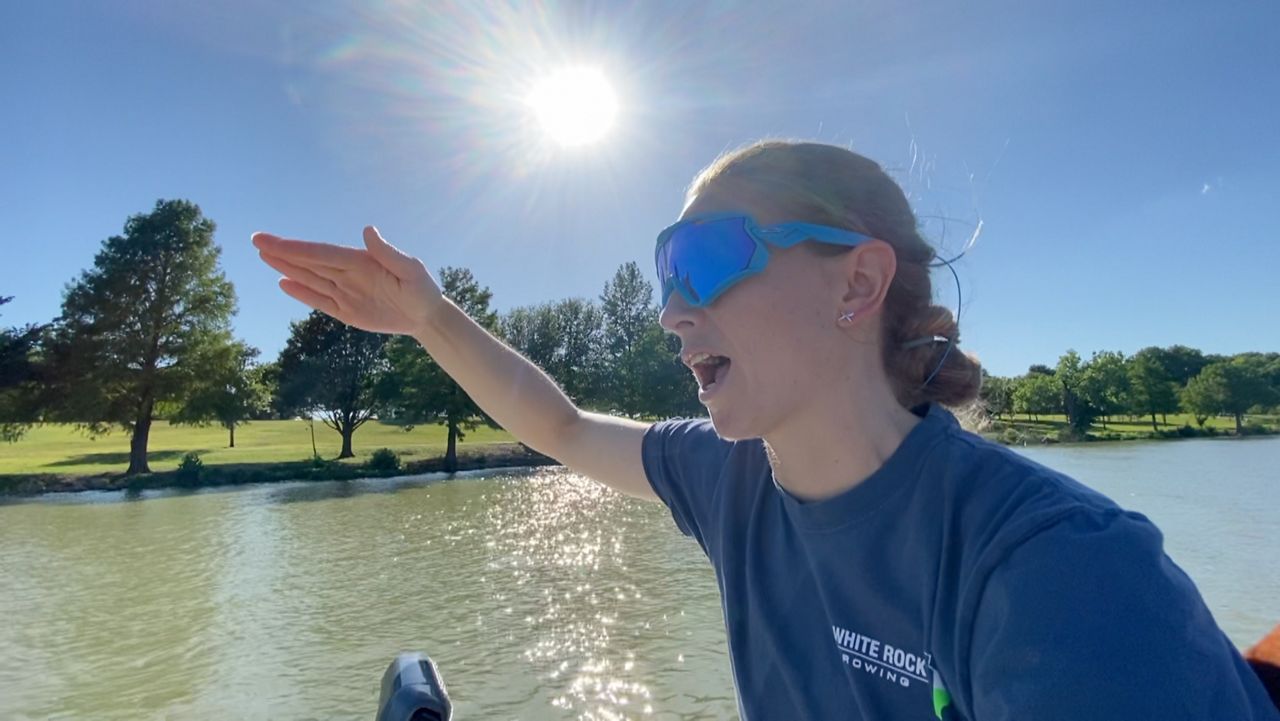 “We didn’t know if it was going to be two weeks like we were told or a year like it was,” said men’s head coach Chris Leonard.

“Here are these amazing coaches and they were just sitting there without being able to do their jobs,” said White Rock rowing chairman Sue Ellen Chambers.

“So we had met the board and Sue Ellen and thought this place was really incredible. There was a lot of potential to do something really cool,” Chris added.

But when word broke that the two were headed east for Dallas, one of their former rowers was heartbroken.

“When I heard [Chris] was leaving it really just hurt,” said White Rock coxswain Paris West. “I had looked forward to being coached by him because he had been a coxswain himself.”

So, Paris packed her bags, found a host family and made the move to Texas to follow Chris and her dreams.

“[Chris] was the way I thought I could get to my goals with rowing,” she said. “Next year I’m going to compete on the Texas Longhorns’ crew team and hope to eventually compete in the Olympics.”

This sport has always been at the core of Chris and Annie’s bond. In fact, they met in college rowing for their respective teams.

“I was in charge of bringing wrenches for my boat and brought the wrong size,” Chris said. “So my coach was like, ‘Go ask that girl over there.’ I went to ask [Annie] and that’s how we first met. She saved my butt at trials.”

Ten years later, they’re still enjoying the sport and helping others do so at an elite level.

Dallas News October 6, 2022 • 0 Comment
Symptoms of Acne Depending on the severity of acne, its signs and symptoms vary from mild to severe. Skin changes…

Dallas News October 6, 2022 • 0 Comment
About Our Dermatologist Office in Dallas From your early years to your golden years and everywhere in between, the dermatologists…

Dallas News October 6, 2022 • 0 Comment
Patients dealing with acne in and around Houston should know the severity of their condition, which determines the possible treatment.…

Dallas News October 6, 2022 • 0 Comment
Specialized Treatment for Rhinophyma Rhinophyma is a skin disorder that causes the nose to enlarge and become red, bumpy, and…

Dallas News October 6, 2022 • 0 Comment
Request Appointment What is acne? Acne is a condition in which pores of the skin become clogged. This causes the…

Dallas News October 6, 2022 • 0 Comment
“I’ve been seeing Amanda for my skin treatment for the last year and a half and have seen incredible changes…